Friends, please spare me a moment of your time.  Let me explain ...

The mystery started shortly after purchasing the location in historic Downtown Lemont.

Old boxes in what was previously a sealed vault in the building's basement remained unopened for months, even as business boomed in the martini lounge upstairs.  Clearing the boxes was always one of those things I "would eventually get to when I had time," and as things go, that time never came.

A post office once stood at 111 Stephen Street generations ago, serving the residents and businesses that lined the old canal.  Horse-drawn carriages were ultimately replaced with gasoline-powered Fords, just as the post office was purchased by Jacob Vine, a local entrepreneur with an affinity for opportunity and food wine.  Jacob converted the building into a lounge, while his wife, Rosalind, would become its caretaker while the business traveled.

Old Lemont Press clippings I discovered while researching the location revealed a competing buyer, Randall Black, losing out on his offer for the building.  A streak of jealousy remained year after the lounge opened, as evidenced by confirmed acts of vandalism and arson reported in the newspaper around 1888.  This year coincides with the last records I found of Jacob and Rose's lounge, no matter where I looked.

Not long after my discovery was when the keys started showing up.

The first yellowish-brown letter arrived in the mail two weeks ago addressed to "My Beloved Rose."  Inside was nothing but a single, small key: Much too tiny for a locked door, but large enough to spark my curiosity.  Peculiar as this parcel seemed, I knew I couldn't just throw it away.  'Why not store it in one of the boxes downstairs," Larry suggested to me when I asked where he thought I should store it.  "Keep it with the rest of the junk."

So I did, along with the second, third, tenth, and twentieth letters and keys that continued to arrive every day since.  I used that first key to open a box in the basement.  Imagine my surprise when I was greeted with the most intricate and unique items from other countries, along with love notes to Jacob's beloved Rose.  After each key arrived, I opened different boxes inside the vault and began placing the items throughout the martini lounge, which is when strange things started to happen.  On many occasions I noticed some items have moved and shifted in some way.  I've seen flickers of light out of hte  corner of my eye, only to turn and there's nothing.  Of course, there is always that one particular seat near the back of the lounge that is ice cold to the touch.  Customers have noticed too.

I received what was the final letter and key in the mail just last week, eerily coinciding with my discovery of a final box hidden in the back of the vault.  That box, charred along the edges and covered in soot, contained a small lockbox that reeked of smoke and ash.

I have no clues as to what happen to Rose upon receiving Jacob's final letter, but I can only assume the worst.  However, perhaps the lock box contains a clue?  Whatever became of Randall Black?

Rose's great-great granddaughter will greet you at the door of 111 Stephen Street on Saturday, October 9th.  She will give you a key.

Will your key finally solve the mystery? 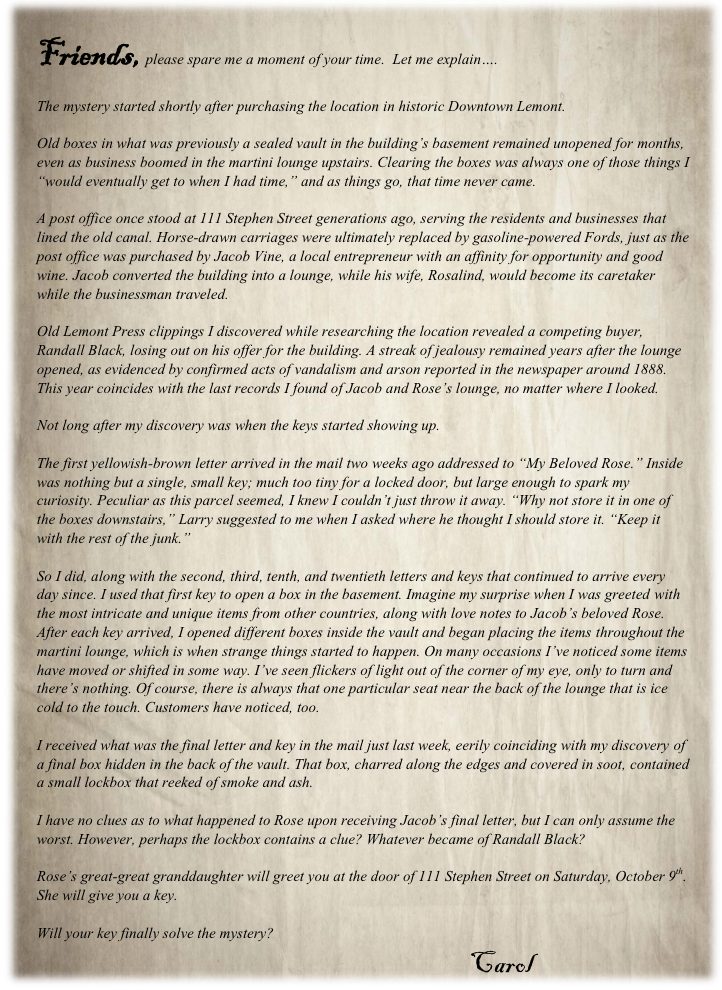