Should Your Small Business Stay on Twitter?  Five Things to Ask Yourself That Have Nothing to do with Elon

Yes, Twitter seems to be the talk of the social media world.  Not necessarily for good reasons either.  Whether you love Elon or you’re fed up with him, you might be thinking about dropping Twitter for your business.

Here are five things to think about, plus a bonus thought to consider.

This is more than just “One out of Five Americans are on Twitter, so I might as well be on Twitter,” which is more-or-less shotgun marketing.  This is a key marketing question that applies to your success.

If you’ve been on social media awhile, see where most of your followers are.  Ask them in person, or survey them to see what social network they spend more time on.  Are you seeing more engagement from one network?

If you have competitors, see where they are as well.

And there are a ton of demographic studies out there, including this one from Hootsuite.  For example, most Twitter users are between the ages of 25 and 34, 56.4% of Twitter users identify as male, and 33% of users have a college education.  That doesn’t mean that other users don’t exist … but go to where you’re going to have the best chances for finding your audience.

My wife keeps reminding me of a simple adage when it comes to making room in our closet.  If there is something you haven’t worn in a year, get rid of it.

It’s understandable that as a small business owner, you might not have the time to run that Twitter account you signed up for ages ago.  Maybe you didn’t expand as you hoped, maybe that young employee went off to college and now nobody is there to take the reigns.  Who knows?

If you’re seeing more results with LinkedIn articles, TikTok videos, or e-mails, focus on that!  If you’re short staffed and struggling to keep your restaurant flowing like it should, focus on that!  You have to consider your battles like a triage, what’s going to make you that extra dollar in the long run and is Twitter it?

4)    Where are you seeing the most engagement, and are you able to keep up with it?

I mentioned engagement a bit earlier when discussing audiences.  Engagement is the secret sauce to getting the most impressions and most reach (especially if you don’t have money to spend for advertising).

It may seem obvious when talking about SOCIAL media, but algorithms for every platform all award engagement when considering how far your post will travel – unless you’re dumping an obscene amount of money into online advertising.  And even if you are paying for ads, those ads that are engaging will perform much better.

So, if you’re not able keep up with engaging your customers and keeping them talking, maybe its best to focus on what you can keep up with.

5)    Does the Toxicity Matter to You and Your Customers?

Toxicity exists in social media (have you seen Reddit?) and has existed at Twitter long before Mr. Musk took over.  In his book The Ride of a Lifetime, Disney CEO Bob Iger mentioned that his company looked at acquiring Twitter and pulled the plug on a 2016 acquisition.

Now, of course, stats are showing that the toxicity is rising.  Even among politicians, but that’s another story.  Many advertisers have pulled funding, but they haven’t necessarily deleted their accounts.

If what you’re seeing from Twitter upsets you, don’t be on the platform.  However, you might make the choice of delegating your business account management to someone you trust.  Or, make your stand and find an alternative to focus on (going back to point #1 – where’s your audience).

If your customers want you to “make a stand,” make your stand if it’s the right business decision and its what you want to do.  (Remember, sometimes the vocal minority can sound like an overwhelming majority).

BONUS THOUGHT:  Is there an up-and-coming social media network to focus on?

When you see the interesting developments at Twitter, which in essence is still trying to find its way, you may see some new players come into the forefront.  Hive, Mastadon, and others are out there.  These are so new that I still haven’t had a chance to even give it a look. 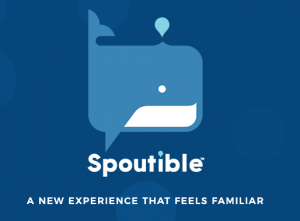 This is a cool logo too, plus I think the social network will be a success.

One to keep an eye out on is called Spoutible, which will launch in February 2023 according to its web site.  The network is early in its development, but is being started by a gentleman named Christopher Bouzy.  He is also the founder is a site named BotSentinel.com, which is able to rate Twitter users on a machine-learning model that indicates if they “engage in targeted harassment, toxic trolling, or using deceptive tactics engineered to cause division and chaos.”  Ratings are 0-100%, with higher scores being users that probably should be reported for breaking rules or just avoided.  Not necessarily a free-speech censoring, but for just “shaking your head and moving on.”  (Remember, social media rewards engagement, so not engaging with troublesome accounts dampens the effect of those just looking for attention.

Whether you keep with Twitter for your business, loudly quit the platform, quietly fade into oblivion, or “just do enough” to keep your platform active to prevent anyone grabbing your handle and making it a parody, make sure to think through this business decision.